Is the nexus a nirvana concept or just the buzzword of the week? 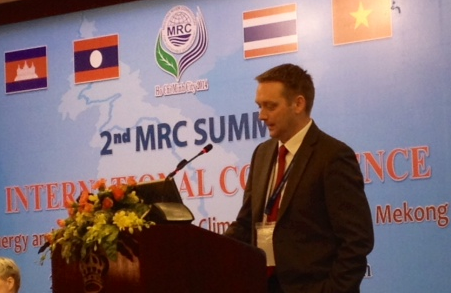 Enda Hayes speaking at the International Conference on Cooperation for Water,
Energy, and Food Security in Transboundary Basins under Changing Climate.

I have never been one for lingo bingo – phrases such as ‘internalising the externalities’ and ‘theoretical conceptual frameworks’ or ‘mutuality for growth’ frustrate me. Certainly this type of language has its uses but too often phrases such as these are just rattled out without the speaker ever truly understanding their meaning. I am gradually getting the sense that the ‘nexus’ is slowly turning into one of these phrases – a buzzword of the day that people are piggy-backing on without truly understanding it.

In November 2014, I attended an interesting and very well attended conference in London organised by the Nexus Network, an ESRC-funded initiative. A combination of speakers from academia, business and policy shared their insights into nexus issues and what became immediately clear is that (a) there is no consistent definition of the nexus and (b) everyone in the room was already converted to the nexus cause. The first problem is that while the nexus has water, food and energy at its core strands, the nexus agenda is predominantly driven by the water agenda, understood by the food agenda and tolerated by the energy agenda. How many times have I heard water speakers stating that ‘nexus is at the heart of what we do’ or the food speakers talking about ‘working outside of our silos’? How rare is it to hear from energy speakers at these nexus events? This raises the question of how can we have meaningful nexus dialogue about managing our future securities when arguably the major player (energy) is not in the room!

Defining the nexus is also a challenge but the nexus concept is so broad that a rigid definition is not required or indeed possible and a schematic graphic is the only way to convey the message. People’s interpretation of the nexus can include all three core strands (water-energy-food) or just two strands (e.g. water-energy). Again depending on the background of the speaker the meaning of the nexus appears to change and be influenced depending on the scale (spatial or temporal) that the speaker is discussing. The nexus issue becomes even more complex when you start to add in the drivers and pressures on the nexus such as climate change, public health, population growth etc. Many of the provided nexus definitions or graphics can often be a bit academic and abstruse for my taste and because of our academic willingness to explain complex issues with complex words we may be losing our business, policy or, more worryingly, public buy-in.

So what can the research community do? For the nexus to be more than just a nirvana concept we need more than just theoretical and conceptual frameworks – we need to embed ourselves in real world action and practice which combines both natural and social science. For example, we need to work with existing systems and frameworks, develop enhanced decision-making processes and these enhanced system models need to help us quantify the drivers of change. Additionally, we need to engage with business/industry but not at academic pace but rather at business/industry pace. This means sharing information today rather than waiting for some obscure journal paper to be published.

For me the nexus is simply: global systems thinking and management for water, food and energy resources under climate change now and in the future (see: simple, nice and broad, covering a multitude of sins). The nexus is not a nirvana concept (e.g. farmers have been nexus experts/practitioners for centuries) and the nexus might be a buzzword for today but it is also an excellent flag for everyone to get behind and collectively march towards a sustainable and secure future.

Categories: Blog Nexus Opinion University of the West of England