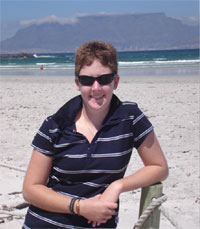 Linda Downsborough has completed a Masters in Education, specialising in Environmental Education from Rhodes University. Her passion for conservation and learning culminated in her investigating social learning processes amongst citrus farmers in the Eastern Cape of South Africa. Prior to this she completed an honours degree in Environmental Science, also from Rhodes University, where she looked at the impact conservancies were making across South Africa.

After leaving Rhodes University, she worked as a project manager for the Marine and Coastal working group at the Endangered Wildlife Trust in Johannesburg. Her days were spent giving school talks to children about marine wildlife and marine issues, educating adults in public outreach campaigns and designing education materials highlighting the plight facing the oceans.

She has spent the last five years as a researcher in the Water Research Node at Monash South Africa. During this time she has been involved in a number of national projects such as a National review of estuary research and the National Freshwater Ecosystems Priority Areas (NFEPA) project. Her research interests continue to grow and span the fields of education and learning, communities of practice, postgraduate student experiences, informal conservation initiatives and the conservation of natural resources. She also has a number of publications which span these fields.