Memorable luncheon with the President in 2013 (President Áder is
sixth from the right; Robert Varady first on the left)

Some background
The third iteration of the triennial Budapest Water Summit took place on 15-17 October. I’ve attended all three and served on the organizing committee of the first of these events in 2013.

Budapest is the city of my birth and I always enjoy returning to it, and each time I find the city a bit more renovated and sparkling than before. I left Hungary as a four-year-old, but have returned frequently, especially over the past decade. In 2013, I had the honor of attending a small luncheon with the president of Hungary, János Áder, who has been the patron of each of the summits. That luncheon and conversation, which included 11 Hungarian and expatriate Hungarian water scientists, was beyond memorable for me.

This year, alas, did not include lunch with the president, but I did get to shake his hand at the start of my panel session. That panel, on science, was the only one President Áder attended.

About the conference
The conference itself was billed as a ‘political event,’ by which the organizers meant that it would appeal to ministers, development banks and agencies, and private donors to support greater progress in meeting Sustainable Development Goal 6 (dedicated to water) – an objective the first Budapest Water Summit had strenuously argued for (the earlier Millennium Development Goals did not have a ‘water goal’). The hope, of course, was that this support would be in the form of increased global investments in the water sector. Time will tell whether that objective will have been attained. 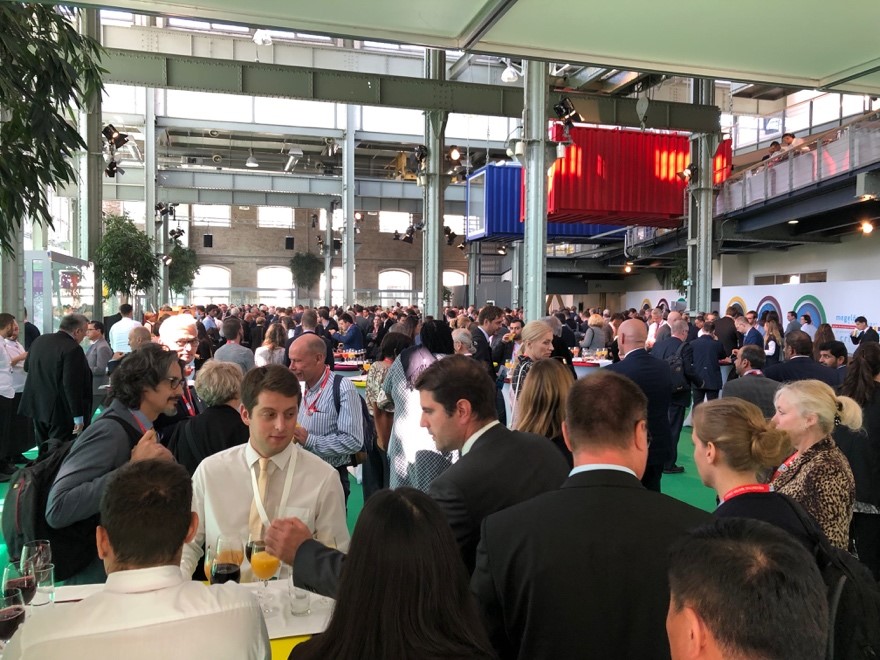 According to the organizers, the conference drew some 2,400 participants from 118 countries, and was attended by, among other dignitaries, 28 ministers and six deputy ministers. In addition, according to the post-conference summary, “…about 130 bilateral meetings took place amongst high-level participants…[and] a number of bilateral Memorandum of Understandings were signed between Hungary and its partners… moreover, [the] Water Impact Fund, the first European water fund was launched with HUF 5 billion [US$16.7 million] initial capital…[and] the Global Green Growth Institute has decided to move its European Central Office from London to Budapest.” The conference concluded with the reading of the Budapest Appeal.

As always at these sorts of events, much of the ‘real’ business occurred during the breaks. Apart from the informal encounters, I attended as an invitee for the 16 October session, Science Against Water Crises: Do We Know Enough? which opened with three keynote speakers (Charles Vörösmarty, a professor at the City University of New York; Claudia Sadoff, the director general of the International Water Management Institute; and Zhang Zhongyi, the chief economist of China’s Ministry of Water Resources). The session then continued with three panel members (Taikan Oki, the Senior Vice-Rector of United Nations University and UN Assistant Secretary-General; Klement Tockner, President of the Austrian Science Fund; and me).

What follows is a more-or-less faithful rendering (with editorial license by permission of the speaker) of the exchange between the moderator, János Bogárdi, and me:

János Bogárdi
Prof. Varady, we can classify our knowledge into three categories: the known knowns, the known unknowns and the unknown unknowns. Fortunately, at least at the scale of the science community, the fourth category: ‘unknown knowns’ does not exist. However, in the emerging, what may be called ‘post-facts world’, we are facing a new category that may be called ‘denied knowns.’ What went wrong? Cannot we argue convincingly for our scientific truth any more? Did we neglect communication and dialogue with communities and critics outside of our ‘ivory towers’? Why is science (seemingly) losing credibility? 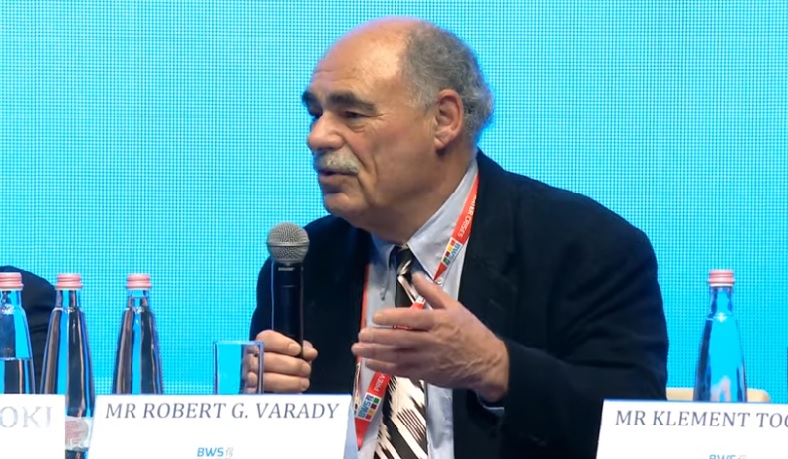 Robert Varady
Let me begin by responding to your statement about knowns and unknowns because that is a good lead-in to how I will answer the rest of your question.

What do we mean by ‘known’? Known by whom? If everything were known, would everyone know everything? Obviously, the answer is no.

On the one hand, there is the stuff we know and on the other hand there are the people who are expected to know this. There is a huge and expanding gap between the two.

This question of what is known turns out to be critical for the state of science. Scientific thinking and progress are underlain by the premise that we understand clearly the distinction between what we consider ‘fact’ (that is, what is known, proven, and universally accepted) and its opposite – uncertainty, speculation, wishful thinking, and outright falsehood. As someone who has respected science and logic my whole life, one of the things that worries me is that these distinctions are becoming blurred and I believe that we are in a period in which we’re witnessing two threats to science that are existential.

First, over the past few years, there has been what I see as a veritable and willful assault on truth, logic, rationality, and intellectual inquiry.

Second, we are experiencing the unintended consequences of rapid, but not fully thought-out applications of technology, especially information technology.

Over the past few years, there has been a striking, palpable increase in skepticism toward and denial of observable phenomena. This has been accompanied by an analogous resistance to rational approaches that seek to explain those phenomena.

Most disturbingly, this process features a devaluation of what we used to think of as ‘objective truths.’

This is manifestly apparent in the manipulation of public opinion via claims of ‘fake news,’ the wide acceptance of dubious or even spurious assertions, the promulgation of conspiracy theories, and even the falsification of videos of actual people – to the point where we can no longer say authoritatively, “I saw it with my own eyes”!

So in my own country, the United States – which used to pride itself as an engine of scientific innovation – we see, among other developments: 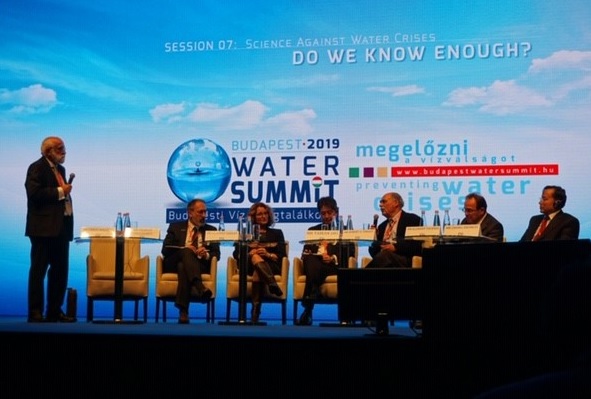 Robert Varady (third from the right)

In short, in many places across the world, this amounts to a general downgrading of the value of scientific inquiry.

This disturbing trend is accompanied by a second threat, one that is less than two decades old and which, very ironically, is the product of applied scientific thinking: the rapid development of platforms that rely on brilliant algorithms that are making life more comfortable and information much easier to disseminate.

The Facebooks, Googles, Ubers, Airbnbs and other such operations have figured out how to maximize efficiency and profit – while minimizing cost and difficulty of application. But these algorithms and artificial intelligence have so far proven unable to maximize or even consider such values as equity, ethics, and social justice. Nor have they been able to adequately anticipate unintended consequences. Perhaps the most obvious such consequence has been the vastly enhanced ease with which misinformation – whether deliberate or accidental – has permeated discourse and influenced policy.

This, in turn, reinforces the already-growing skepticism toward rationality I referred to previously.

I think we can all agree that scientists need do a much better job convincing the public that scientific thinking remains essential. And while we’re at it, let’s also make sure our scientists and engineers, while innovating, are better attuned to questions of fairness and social justice – and that they communicate their findings more convincingly to counter the assault on science and reason.

But the pitfall of this approach is that it’s a one-way channel. I believe we’ve focused almost entirely on the supply side of the information-transfer equation. From the scientific side, we either have enough knowledge or information – or we need more of it. We have enough data – or we need more. But the real bottleneck is on the demand side, which is the harder one to deal with. We don’t quite know what it would take to get the demand side to accept the supply we’re willing to give.

So my question is how do we take all that supply, all the scientific and technological goodies we’re willing to provide, and convince the public, the stakeholders, the decision-makers that this is the right thing to do, that it’s worth all the sacrifices scientists are willing to make?

Robert Varady has directed the Americas portion of the International Water Security Network since its start in 2013.  He is a research professor of environmental policy at the Udall Center for Studies in Public Policy at the University of Arizona.