The ‘Third Pole’: A monitoring and assessment programme to sustain the Hindu Kush Himalayan Region as a global asset 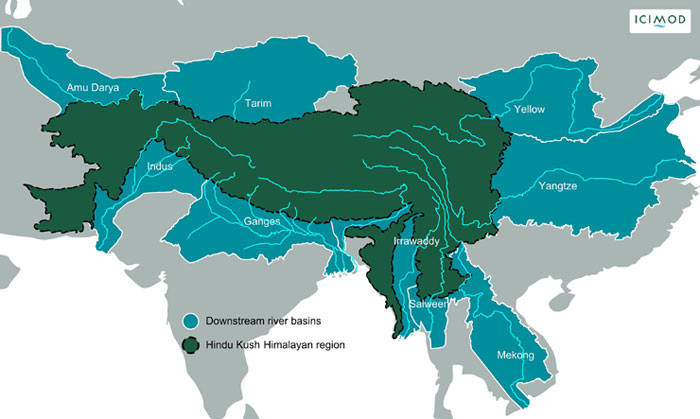 From 26-28 January 2016, the first writers’ workshop for the coordinating lead authors of the Hindu Kush Himalayan Monitoring and Assessment Programme (HIMAP) took place in Kathmandu, Nepal. HIMAP is a comprehensive assessment of the Hindu Kush Himalayan (HKH) region that aims to assist in addressing threats, act on opportunities, and scale up cutting edge approaches.

HIMAP frames the challenge as follows: “Outside of the North and South Poles, the HKH region contains the largest area of permanent ice cover in the world, which is why it is sometimes referred to as the ‘Third Pole’ of the earth. Its terrain encompasses the source of 10 major river systems, 4 global biodiversity spots, 330 important bird areas, and hundreds of mountain peaks over 6,000masl. The region provides water, ecosystem services, food, energy, and livelihood to 210 million people directly. An additional 1.3 billion people living downstream benefit from its resources indirectly and more than 3 billion people rely on energy produced in the basin catchment area of the Himalayan river systems. The region is also home to some of the most diverse cultures, languages, religions, and traditional knowledge systems in the world. For these reasons, the HKH region is clearly a major global asset, critical to the planet as a whole.”

At the same time, the HKH is undergoing rapid and dynamic change from such forces and stressors as climate change, disaster events, migration, urbanisation, road construction, hydropower development, economic growth, and trade globalisation. The interplay of these complex drivers of change and trends is challenging to predict but will have major consequences not just in the region but globally as well. It is critical to define the future scenarios and to understand the cost to the environments of the HKH region and human wellbeing. From a policy standpoint, achieving food security, water security, and livelihood security in the region will require better modelling of these different future scenarios based on the different variables so that the scientific community, policy makers, private sector, and community stakeholders can come together and make optimal governance decisions to sustain the global asset. It will also require country-specific recommendations to guide national-level policy making.

HIMAP addresses numerous challenges linked to water security, including but not limited to the following:

HIMAP considers multiple future scenarios for the HKH such as a business as usual scenario and an eco or green scenario, or an industrial or business scenario. The scenario chapter will focus on the 2050s and 2080s. By back casting the storylines developed for the 2080s period the existing policies for the 2030s will be analysed on consistency. 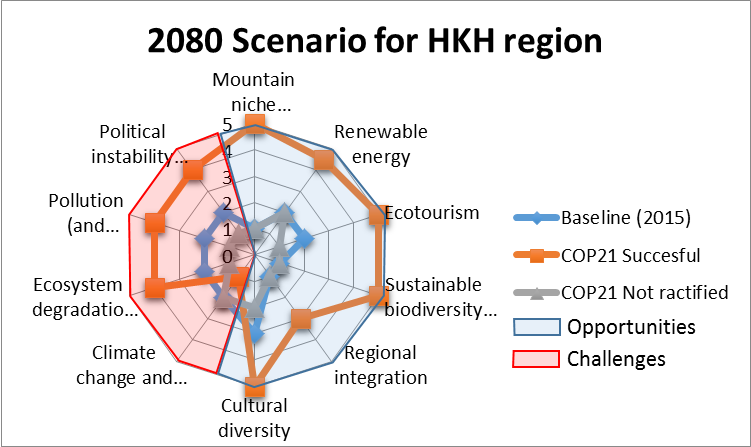 The figure (right) depicts how these drivers and opportunities were considered by the participants at present (Baseline 2015) and how they may change in 2080 with a scenario where COP21 is very successful and a scenario when COP21 is not ratified.

During the coming months further scenario exercises will be developed with other decision makers representing the large differences in nations and culture and bio-physical diversity of the HKH region. Based on the outcome of these workshops, the preliminary scenarios described earlier may be supported or drastically change, making this an exciting part of HIMAP.

The end product of the current round of the assessment process will be a high-impact book, due for publication in early 2017, which is intended to form the basis for a science-policy dialogue approach to anticipate, prepare for, and adapt to future scenarios of change in the HKH region.