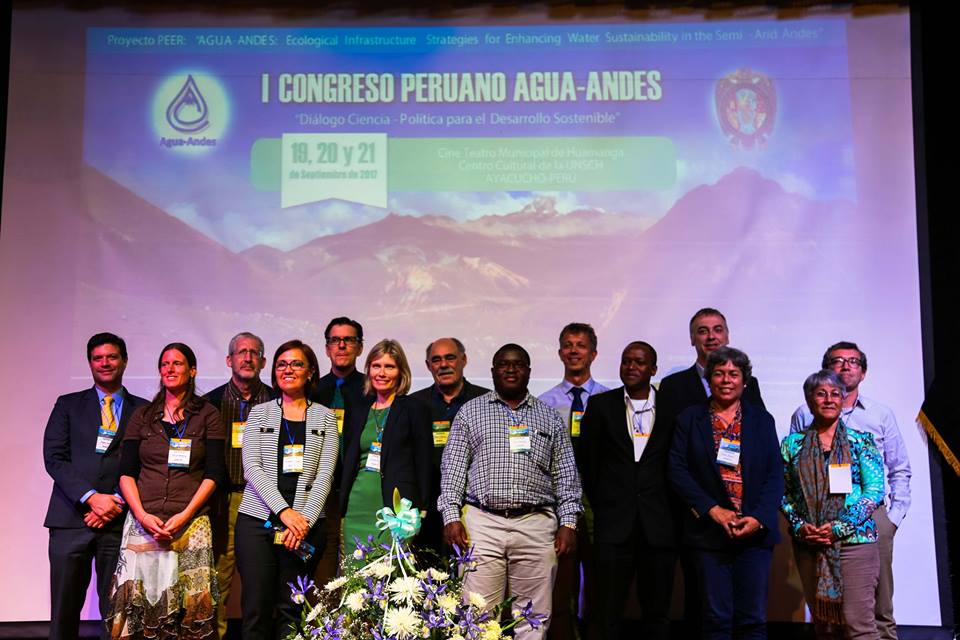 A long time in the planning, it was great to see the Congress Agua-Andes (the first of its kind in Peru) take place so successfully. There were 300 people in the auditorium on the opening day (which was simultaneously translated between Spanish and English), and even more the next day (when proceedings were in Spanish only). A total of 409 attendees were registered during the three-day event in Ayacucho in September.

The congress was organised by our Peruvian partners the Centro de Competencias del Agua and the Agua-Andes Research Center, both led by Professor Bram Willems, and counted on the support of IWSN, the University San Cristobal of Ayacucho and over a dozen other collaborating institutions. The topics covered included water security, green infrastructure and sustainable management of ecosystem resources. There was a total of 29 keynote speakers (13 international speakers) and 18 oral presentations about work developed by junior researchers. Furthermore, there were two roundtables which counted on the participation of stakeholders and decision makers; a workshop for validating the national plan for science and technology on water resources of the Peruvian science and technology council (CONCYTEC); and the presentation of modules for water treatment, constructed by students supported by IWSN and the USAID-funded PEER programme.

In the course of the opening day, IWSN Director Chad Staddon, and Regional Directors Christopher Scott and Robert Varady (University of Arizona) and Bimo Nkhata (Monash South Africa University) gave well-received lectures on the work of the IWSN worldwide. Scott and Varady emphasised work conducted in conjunction with the Inter-Americas Institute AQUASEC programme on science-policy dialogues whilst Staddon focussed on the importance of engineering resilience in water systems at different spatial scales.

Later in the day there were lively panel discussions on such subjects as the water-food-energy nexus and green infrastructure. Our Peruvian hosts used a ‘moderated question and answer’ format which saw participants writing down questions as the presentations unfolded, which were then presented to the speakers by the moderator. One common concern of participants was that resilience could be hard to achieve if climate conditions remained uncertain – certainly Peru has experienced extremes of both flood and drought in recent years. Another concern was that the regulatory and finance environments might not be sufficiently strong to support nature-based solutions to resilience challenges.

Later in the week, IWSN members had a field tour of a project in the headwaters of the Cachi basin in Ayacucho, organised to build small dams and wetlands to replace the high level glacial/snowpack water storage lost to warming temperatures. Some of the challenges faced by these communities have been discussed in other IWSN blogs, here and here.

* A further blogpost about this conference, written by Robert Varady and Adriana Zuniga from University of Arizona, is available on the Udall Center website. It includes short video clips of some of the particpants reflecting on their experiences in the Andean region.